Dangerous weapons: The Pirc and Modern 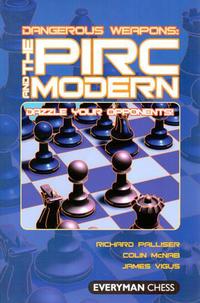 Dangerous weapons: The Pirc and Modern

Do you need to freshen up your opening repertoire? Choose Dangerous Weapons and amaze your opponents with new and exciting opening ideas!

In this book, three leading experts take a revolutionary look at two popular and closely related openings: the Pirc and the Modern. Instead of analysing the well-trodden main lines they concentrate on fresh or little-explored variations, selecting a wealth of ‘dangerous’ options for both colours. Whether playing White or Black, a study of this book will leave you confident and fully-armed, and your opponents running for cover!

Dangerous Weapons is a series of opening books which supply the reader with an abundance of hard-hitting ideas to revitalize his or her opening repertoire. Many of the carefully chosen weapons are innovative, visually shocking, incredibly tricky, or have been unfairly discarded. They are guaranteed to throw even your most experienced opponents off balance.

IM Richard Palliser is the editor of CHESS magazine, and assistant editor at Everyman Chess. He has numerous tournament successes to his name, and in 2006 he became Joint British Rapidplay Champion. He has established a reputation as a skilled chess writer and has written many fine works includingThe Complete Chess Workout and The Torre Attack: Move by Move.

Dr Colin McNab is a Grandmaster, a former Commonwealth Champion and a four-time Scottish Champion who has represented his country at many Chess Olympiads. He has been a regular columnist for Scottish Chess magazine for a number of years. He is also a doctor of mathematics, having studied for a DPhil at Oxford University.

Dr James Vigus is a FIDE Master and a former British Junior Champion. His first book for Everyman Chess, The Pirc in Black and White, was hailed by reviewers as an outstanding work.