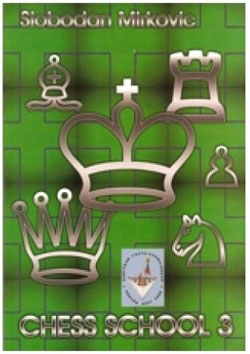 The contents of "Chess School 3" represent the lectures resulting from the author’s work with his most successful students. The book consists of three parts:

What new material does this book offer?

Rook endings are divided into several elements, in order to facilitate the study of this important segment of chess opus. Game plans are emphasized and principles and patterns are formulated. At several places the errors in positional assessment and analysis found in some famous chess books have been corrected.

The second part of the book refers to the new theory of combination, which stems from Botvinnik’s definition of a combination.

All combinations are classified according to the piece which is sacrificed and the objective. The basic idea is that it should enable uncovering and identification of new principles of creating combinations, thus improving the quality of preparation.

The third part of the book consists of two parts.

The first part deals with three strategic motifs and the essence lies in a new way of analyzing of games and identifying the key moment and its detailed explanation. For example, in this part we study "attack on the e6 square", "Passed pawn in the centre", "blockade of the center with pieces."

A special place in this part of the book belongs to the cult Nimzowitch position from 1925 on the theme “Blockade”.

The second part features a whole new idea concerning the classification of middlegames. Middlegames are systematized according to pieces on the board. More broadly viewed, along the lines of this idea there can be a systematization of all positions in chess, which means that it is possible to more easily and quickly define the patterns of the game. This allows the creation of a new system of preparation of top players.