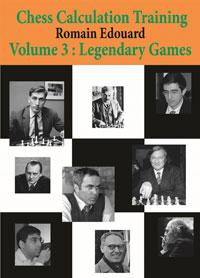 This book is a mixture of all kinds of exercises, but with one thing in common – all the games were played before the year 2000, except for a few by two big names, Kasparov and Karpov.

There are several objectives to this book, besides the obvious calculation training. The age of the games brings in a cultural element and some positions of a whole different kind, since chess was very different a few decades ago in the pre-computer era.

Going through thousands of games, Romain found many exceptional positions that have been ignored by previous books and articles, as engines were too weak at the time, and analysis too superficial, to appreciate the depth of some combinations or some moves that had been missed. In this book you will come across many of these examples as well as a few famous positions that you may already have seen – just for the record!

In the fifteen chapters and 480 exercises in this book, we will encounter many subjects, for example attack, defence, surprises and hidden moves, while some chapters will be especially dedicated to four great players – Kasparov, Karpov, Fischer and Kramnik – in order to learn about their styles. The last two chapters are also of a very special kind, ‘Extraordinary Wins’, where you will see moves of the kind you won’t meet very often in life, and ‘Special Section’, with exercises requiring special instructions.