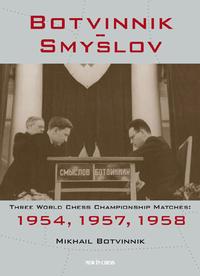 A unique look behind the scenes of World Championship Chess.

The writings of Mikhail Moiseevich Botvinnik (1911 – 1995) are legendary. ‘The Patriarch’ took professionalism in chess to a new level and set new standards for preparation.

In this book, Botvinnik writes the story of the three clashes with his compatriot Vasily Smyslov, matches full of tension between two virtually equal opponents.

Botvinnik successfully defended his title by drawing the first match in 1954, but the younger Smyslov won in 1957. Botvinnik bounced back with incredible resilience to win the third match, and regained ‘his’ world title.

Mikhail Botvinnik, one of the greatest chess players of all time, analyses almost all the games in this book, which also features annotations by Smyslov and other top grandmasters. The comments of the great Champion reveal his match strategy and his view on the strategic choices of his opponent. He spares neither himself nor Smyslov.

Botvinnik – Smyslov is a fascinating account and an important historical document on the pinnacle of chess of the mid-20th century. With a preface by Vasily Smyslov.