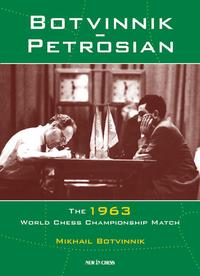 This book marks the end of an era: the mighty Mikhail Botvinnik (1911-1995) loses his world title fifteen years after he conquered the highest crown for the first time.

It is a gripping account of a heroic battle. The ageing Botvinnik desperately tries to bounce back after his Armenian opponent Tigran Petrosian has taken an early lead, but ultimately fails.

Mikhail Botvinnik, one of the greatest chess players of all time, analyses many of the games, reveals his match strategy and comments on the strategic choices of his opponent.

This important historical document also features annotations by Petrosian and other top grandmasters. Both Petrosian and Botvinnik (in a revealing essay called "Why did I lose the match?") look back on this momentous event in their lives.

Also included are a collection of all other games between the two rivals, the games of a secret training match by Botvinnik, as well as Botvinnik's legendary final notebook containing his preparation for a match with Bobby Fischer in 1969 - a match that was never to be.