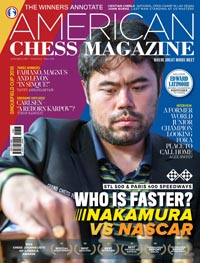 After two years, at last a portrait of Hikaru Nakamura takes pride of place on the front cover of American Chess Magazine – and with full justification following his consecutive wins in Grand Chess Tour events held in Paris and Saint Louis over the summer. Indeed, when it comes to speed, we dare say that Nakamura even rivals NASCAR – albeit in the realms of rapid and blitz chess! Here, by means of a selection of annotated games from these tournaments, IM Venkat Saravanan endeavors to discover the reasons for Hikaru’s superiority over his principal rivals in this fast and furious form of chess which never fails to provide so much drama and excitement.

Switching to the world of top class classical chess, we highlight Shakhriyar Mamedyarov’s spectacular tournament win in Biel, one and a half points ahead of World Champion Magnus Carlsen. Though this was a sensational result in itself, perhaps even more significant was Shakh’s new found maturity of play, so different from his former risky and adventurous style. The success of this fresh approach is amply reflected in the consistency of the Azerbaijani grandmaster’s latest results, which have propelled him to world No.3 in the live ratings.

Also over the summer, Saint Louis hosted another edition of its traditional Sinquefield Cup, where the crème de la crème of world chess was gathered together to do battle for big time prestige – and big time pay! After ten days of fierce fighting, for the first time in its history, three players, Levon Aronian, Magnus Carlsen and Fabiano Caruana, finished ‘in Sinque’ at the head of the tournament table and by mutual agreement reconciled themselves to sharing the honor of first place. Local resident and regular US Women’s Olympic Team member, WGM Tatev Abrahamyan, presents a round by round ringside report, supported by additional contributions from GMs Mihail Marin, Evgeny Miroshnichenko and Alex Ipatov.

As a sequel, we also present an interview with Alex Ipatov, in order to acquaint our readers with this ambitious and much traveled former World Junior Champion, who is presently studying in the US and still searching for a place to call home.

As is his custom, Magnus Carlsen demonstrated great endgame play at the Sinquefield Cup and IM Tibor Karolyi pieces together the components that make him such a feared ‘virtuoso’ in this phase of the game. Tibor also raises the question as to whether Carlsen may now be designated as a reborn Karpov!

On the same topic but from another point of view, endgame expert GM Karsten Mueller examines how well Fabiano Caruana conducted the endgame even in his younger years. Endgame technique is expected to play a very important role in the world title match in London and it will be extremely interesting to see if the American challenger’s natural talent will enable him not only to match but even outdo the champion in this phase of the game.

GM Alex Fishbein also pursues the same theme in his regular endgame column by going down memory lane and revisiting some of the most important endgames from previous world championship matches. Furthermore, he looks forward to seeing if the upcoming title match will provide more worthy examples to add to these earlier classics.

The forthcoming Carlsen-Caruana match is of course arousing widespread interest and speculation in the chess world, but IM Danny Rensch is looking even further ahead to its aftermath, wondering whether the players’ rivalry will give rise to the biggest chess boom in America since the glory days of Bobby Fischer.

Amidst all the anticipation of the London encounter, have you forgotten Sam Shankland? Well, we haven’t! GM Jacob Aagaard directs the spotlight on Sam’s games to illustrate four types of decision making in chess. Jacob has personally assisted Sam with his training over the past five years and so is ideally suited to providing insights into the American’s remarkable run of successes this year.

Meanwhile Sam presents annotations of his own to one of the games he played in the Panamerican Championship, held in Montevideo, Uruguay, which he won in convincing fashion. In fact Sam’s game forms only part of a more detailed report by GM Robert Hungaski on this event, which he is proud to regard as ‘his favorite tournament of the year’.

Summertime was replete with tournaments in the United States too. Exclusively for ACM, GMs Cristian Chirila and John Burke present games they played and insights they gained from their respective victories at the National Open in Las Vegas and US Masters in Greensboro.

David Llada reveals background material on the ‘Blindfold King’, GM Timur Gareyev, who won this year’s prestigious US Open in dazzling style, with eight wins out of nine games and a relentless display of ultra sharp play and great determination. Although Timur has gained world fame for his record-breaking blindfold performances, here you’ll have a rare chance to enjoy the lively variations he calculates during the game – with his eyes wide open!

With regard to opening play and chess strategy in general, GM John Fedorowicz explains one of the most common problems Black players face in modern chess – the active deployment of their bishop on c8. Similarly, GM Michael Rohde deals with another issue that has to be tackled in certain openings – whether or not White should spend time recovering the pawn on c4 after Black captures with his d5-pawn.

Just before we had filled the last available pages of this issue, rising star Christopher Yoo broke the previously held record by Sam Shankland and claimed the California State Championship at the age of 11! Here we present a profile of Christopher and commentary on one of his wins en route to the title.

Speaking of juniors, individual rivalries that start at a very early age can have a lasting impact on the future development – and competitive relationship – of the respective players. Here IM Praveen Balakrishnan relays a lesson he learned from a defeat he suffered against GM Ruifeng Li.

And as for lessons and advice given by a top class grandmaster, six-time World Championship Candidate Boris Gelfand is this month’s guest on our regular ‘5x5 Q&A’ page. Moreover, elsewhere in the magazine, Swedish grandmaster and experienced coach Pontus Carlsson offers valuable tips on how readers can sharpen their tactical skills.

How do boxing and chess compare – and even combine? There’s no better person to explain this than former professional heavyweight boxer Edward Latimore, who has just recently competed with success in his first official chess tournament.

No doubt we have forgotten to mention various other items but why not discover these for yourself by reading the very best chess magazine that money can buy!