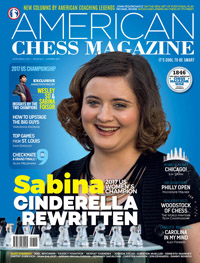 Just imagine that the two newly crowned US champions are by your side, explaining their most crucial games, move by move... Well, this is precisely what the third number of the American Chess Magazine brings you, exclusively, thanks to the contributions of Wesley So and Sabina Foisor.

And there is much more. From the men’s championship, third-place Varuzhan Akobian explains how he and Alexander Onischuk managed to upstage the big guys, Fabiano Caruana and Hikaru Nakamura! Then Ivan Sokolov highlights three of the most interesting and significant games played in St.Louis, while Jaan Ehlvest reveals current trends in opening theory by identifying theoretical novelties unloaded by the American players.

For the women’s championship, Alisa Melekhina presents an interview with Sabina Foisor and then dissects moments from key games in the title race – including a spectacular forced checkmate in nine, which represented a grand finale for the eventual winner.

The excitement in St.Louis has also inspired other authors, such as Joel Benjamin and Michael Rohde, to include further championship games in their columns. Additionally the ACM team has been joined by two more American coaching legends. As well as Joel Benjamin and Alex Fishbein, we now have John Fedorowicz who shares his views on a currently popular antidote to the Benko Gambit – 5.b6 – from the point of view of positional play, while Michael Rohde revives his popular Chess Life “Game of the Month” column (published from 1991 to 2006) in a new format, with the prime objective of showcasing the most recent examples of American chess in its finest.

Columns with a pronounced instructive element are those by Vassily Ivanchuk, who presents a striking example from his own play of the dangers of grabbing the so-called poisoned pawn on b2; Karsten Mueller, who reflects on the career of the late and legendary Mark Dvoretsky, showing how we can learn so much about endgame technique from this most highly regarded of chess trainers; and Alex Fishbein who guides us through the hurly burly of mind tricks – yes, mind tricks! – that we should be wary of in certain situations during practical play.

The magazine also devotes plenty of pages to recent tournaments played across the USA, such as the Chicago Invitational where the performances of several participants are highlighted, including that of the winner Ilya Smirin who provides a personal perspective on his overall tournament victory. Participating grandmaster Alex Fishbein writes on the North Carolina Invitational, while another of our regular columnists, Mackenzie Molner, puts on display sparkling chess played in the Philadelphia Open.

Special attention is given to the World Amateur Team Championship, played in New Jersey. Here Pete Tamburro’s report includes 25 Questions put to organizer Steve Doyle, a major figure in American chess, who relates his lifetime chess experiences in characteristically upbeat fashion. In addition, Gennady Sagalchik discusses the secrets of succesful coaching, with games annotated by all four members of his victorious team of teenagers!

The second part our in depth coverage of the New York encounter between Carlsen and Karjakin focuses on the best two games of the match, in the opinion of last year’s European Champion Ernesto Inarkiev.

A hidden gem of this issue of ACM is a previously untold story by John S. Hilbert, who takes us deep into the pages of chess history, way back to 1846 when a publishing war broke out between the very first two American chess magazines!