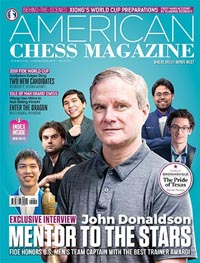 The cover of the ACM’s combined #14-15 issue boasts a portrait of U.S, team captain IM John Donaldson, as well as members of the most successful American Men’s Olympic squad in history. In recognition of the team’s epic achievements in winning gold and silver medals in 2016 and 2018, respectively, Donaldson has now been presented with the best trainer award by the FIDE Trainers’ Commission. In an exclusive interview, America’s Mr. Chess shares memories from his rich chess career, not only as a team captain/trainer, but also as an organizer, author and publisher of books and magazines – a true legacy that will live on for many generations to come.
One of the most important tournaments in the World Championship cycle, the World Cup, held in Khanty-Mansiysk, is covered by GM Robert Hungaski with a special focus on the winner Teimour Radjabov and the runner-up Ding Liren, who, incidentally, will both be competing in the forthcoming World Championship Candidates tournament. The performance of each of the U.S. representatives is also individually assessed, in particular that of the most successful American player GM Jeffery Xiong, who has had a fantastic 2019 in terms of both results and overall progress. Here we examine Jeffery’s play from the perspective of pre-game preparation – a true “behind the scenes” story revealed by his coach Vladimir Georgiev.

Another major tournament report comes from GM Michael Rohde who provides extensive coverage of the FIDE Chess.com Grand Swiss Open played on the Isle of Man. Here, the denouement came about in a dramatic last round scenario which resulted in Chinese GM Wang Hao scoring a surprise overall victory on tie-break from Fabiano Caruana and thereby qualifying for the next Candidates tournament. The performances of other U.S. players are also covered as are some rather curious and even amusing episodes from the tournament. Looking back, our authors faced the difficult task of presenting the most significant chess highlights of the past year.

From the theoretical perspective, GM Ivan Sokolov came to the conclusion that it was the symmetrical openings, 1.e4 e5 and 1.d4 d5, where the most important opening developments took place this year. True, trends are usually set by the elite but the aim of the article is primarily to explain the basic concepts and logical development of these new ideas. Indeed, by presenting a wealth of examples illustrating the implementation of this year’s innovations in practical play, the author hopes to make them
accessible to competitive players of varying levels of play. For his contribution, GM John Burke has chosen three outstanding positional victories of the year and analyzed them in great depth, with both explanatory text and concrete lines of play, to demonstrate how strong players patiently and progressively increase an advantage, whilst keeping their opponents under sustained pressure – a sure-fire path to winning chess!

Our regular columnist GM Alex Fishbein does what he does best by dissecting his choice of the top ten endgames of 2019. With his customary modesty, he shares with readers the lessons he has himself learnt from studying these endgames in the hope that any aspiring player will be encouraged to follow his example and improve their technique in this stage of the game, which so often demands the greatest precision in order to
achieve an optimum result.

To conclude our overview of the year, GM Joel Benjamin focuses on the players and performances that have attracted attention in 2019, both at home and abroad. Girls and boys, youngsters and seniors, strong and not so strong are all given a mention as are those behind the current boom in the American chess scene. To show our commitment that the pages of American Chess Magazine are open not only to elite grandmasters, we start a new column devoted to unsung heroes – with IM Justin Sarkar getting the show on the road with his real life story of how has been able to achieve victory over adversity through the medium of chess. Nor have we forgotten about the great strides being made in local and state chess, as amply illustrated by GM Bartek Macieja’s wonderful story of his personal involvement in the massive increase in popularity of the game in Brownsville, Texas. This is another inspirational example of how investment in chess can rapidly find fertile soil and make a positive impact on many sections of the community – and even become a source of pride! So, although collegiate chess in the USA has also been developing at an incredible rate over the past decade, that’s only the tip of the iceberg as progress is now also being made to encourage all strata of society to share the benefits of playing chess.

IM Boroljub Zlatanovic invites readers to a master class in chess strategy, where he explains the significance of open files on the board, pointing out the advantages of carefully studying the games of great champions, past and present, as part of the learning process of important concepts and technical know-how.

Another of our regular contributors, GM Jacob Aagaard, challenges readers to solve a fresh selection of puzzle positions in his All-Round Training column, while Jon Edwards explains new developments in chess software based on the digitalization of chess books and the AI revolution in advancing the power of computer chess engines. For all those who still appreciate “the good old days”, we have resurrected a charming story that first appeared in an issue of American Chess Magazine – published in 1897!

As usual there are tournament reports, book reviews by FM Carsten Hansen and a most welcome appearance in our 5x5 Questions and Answers column by GM Maurice Ashley – the man who makes chess look so exciting both on screen and face to face!