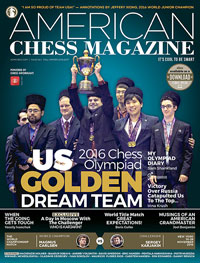 The American Chess Magazine comes to you at the end of 2016, on the crest of a wave that has provided the biggest boost to the US chess since the early 1970s, when Bobby Fischer claimed the world title from Boris Spassky.

Celebrating The Resurgence Of US Chess

The international team that has in the last six years restored the legendary Chess Informant to its former glory, and more recently revamped the 135–year–old British Chess Magazine, has now been encouraged to celebrate the resurgence of US chess with the help of some of the finest American authors and editors.

Naturally, the success of the USA team at the Chess Olympiad comes under the spotlight in our first issue, as does Jeffery Xiong’s capture of the world junior title. There is also an in-depth preview of the forthcoming world championship match between Magnus Carlsen and Sergey Karjakin, to be staged in New York during November. Nevertheless, readers might be surprised at the number of contributed articles by writers from foreign lands. But here the ACM is only mirroring how dynamic and how global the chess scene is today.

TROPHY FOR COACH DQ&A with IM John Donaldson, Captain of the US team

I AM SO PROUD OF TEAM USA!, by GM Jeffery Xiong, 2016 World Junior Champion

A BITTERSWEET FINAL ROUND, by GM Eric Hansen

NEXT TIME I’LL TAKE ON h7!, by GM David Smerdon

I SPRUNG A TRAP FOR NAKAMURA, by GM Mikheil Mchedlishvili

THE BEST RESULT OF MY CAREER, by GM Andrei Volokitin

OUR VICTORY OVER RUSSIA CATAPULTED US TO THE TOP, BUT..., by GM Irina Krush

A DAY WITH THE CHALLENGER, IN MOSCOW, by FM Josip Asik

WHEN THE GOING GETS TOUGH..., by GM Vassily Ivanchuk

MUSINGS OF AN AMERICAN GRANDMASTER, by GM Joel Benjamin

CHESS.COM: BEHIND THE SCENES, by IM Danny Rensch