A World Champion's Guide to Chess 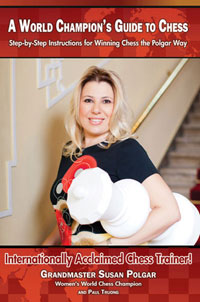 A World Champion's Guide to Chess

SUSAN POLGAR is a winner of four Women’s World Championships and the top-ranked woman chess player in the United States. She became the #1 woman player in the world at 15 and remained in the top 3 for over 20 years. In 2013, she received the U.S. Coach of the Year Award and the following year, she was named the Chess Trainer of the Year by the International Chess Federation (FIDE). She thus became the first person in history to be accorded both honors. Under her guidance, SPICE chess teams at both Texas Tech University and Webster University have won a combined five consecutive National Division I Collegiate Chess Championships.

PAUL TRUONG is winner of eleven national titles, a prolific chess trainer, and award-winning chess author. He was also captain and manager of the historic 2004 US Women’s Olympiad team which won two gold and two silver medals, as well as the coach of the five-time national champion SPICE chess teams.