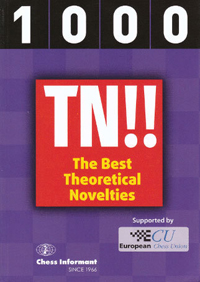 From 1971 to 2011 the Chess Informant jury has convened to vote on the best theoretical novelty from the previous volume. Once, and only once, was the nine member jury in complete concordance regarding the winning novelty. It was like a once in a lifetime moment that the stars align in perfect harmony, where one game scores above all others as a clear winner with the maximum ninety points!

Our new book 1000 TN!! collects the best of the best 1,000 theoretical novelties from Chess Informants 11 to 110 and provides an adventurous journey through the development of chess openings during the last forty years. Moreover, in every theoretical line, we add the latest word on the state of theory.

In the "contest" of TN's who actually won the game was of lesser importance than whose idea contributed the most to chess theory. There are sixty players among the winners, with 15th World champion Viswanathan Anand at the top of the list with nine novelties, one ahead of 12th World champion Anatoly Karpov. In a meantime, Anand won one more award (Informant 111) so the total number of his wins is 10!

"Chess Informant" has been the definitive source of chess information since its inception. Due to the high quality analysis by the best players, it is essential to opening preparation. The jury lists help the reader measure the pulse of the development of the game and the most important trends.