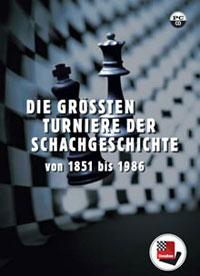 Since the year 1886, there have been world championships in chess. The world champion was nearly always determined in a duel. Whoever wanted to climb the throne, he had to defeat the reigning king. Despite this long period in time, there have only been 14 world champions in the history of chess until the year 2000, when Vladimir Kramnik seized the title from Kasparov. Far more extensive, however, are the world championships matches themselves. According to ChessBase, the last clash between Kasparov and Karpov was world match no. 35. Afterwards, there were three Kasparov duels which played outside the reign of FIDE. A second database is dedicated the six FIDE world championships from 1993 until 2002.

for each Wch match one introductory text including pictures
short biographies of all world champions and challengers
more than 2,200 games, more than half of them annotated
extensive video material (about 4,5 GB)
training database by Dr. Karsten Müller